The close of 2018’s hurricane season

A look at the progression of hurricanes over the years 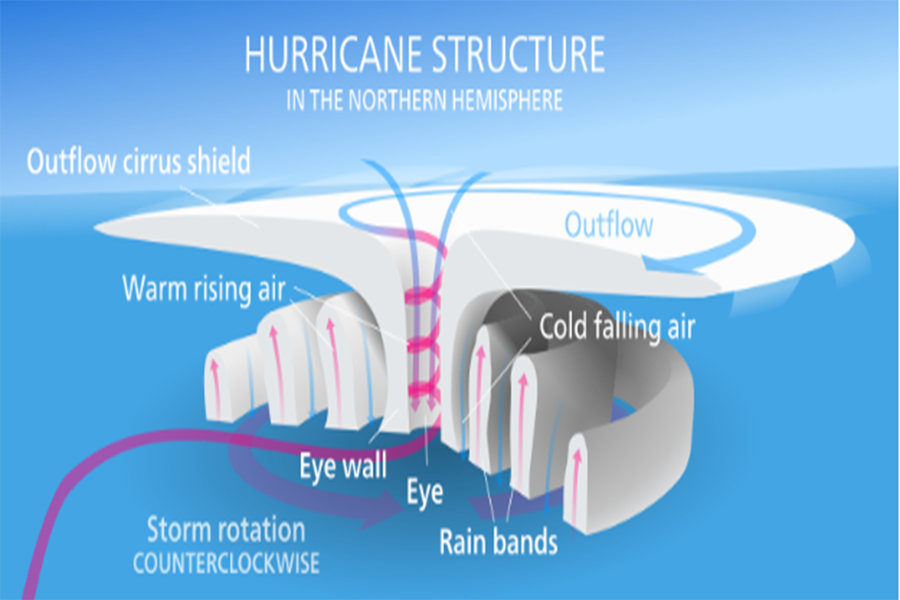 Hurricane season is officially from June 1-November 30 every year. Although hurricanes can happen year round, it is more common for them to be in that time frame due to the conditions that hurricanes need to form. In order for a hurricane to form they need warm, moist air. This is why they only form in warm oceans closest to the equator. The warm air rises above the surface of the water leaving a low pressure space for more air to enter. Then the colder air that is in higher pressure areas sinks into that low pressure space, warms up, and rises like the original air, which leaves another pocket of low pressure space for this cycle to continue. NASA Space Place states, “As the warm, moist air rises and cools off, the water in the air forms clouds. The whole system of clouds and wind spins and grows, fed by the ocean’s heat and water evaporating from the surface.” This cycle of clouds and constant sinking and rising of air creates the rotating storm called hurricanes. The reason they weaken in most cases by the time they reach land is because they are no longer being fed by the warm, moist air in the ocean, but that does not always decrease the amount of rainfall on land even if the winds have somewhat subsided.

As the 2018 hurricane season comes to an end, there is an increase in the number and intensity of hurricanes from years past. Based on the National Weather Service data, in 2014 there was eight hurricanes during peak season, 11 in 2015, 15 in 2016, 17 in 2017, and 14 so far in 2018. There has progressively been more hurricanes every year during peak hurricane season. Although 2018 does have less hurricanes currently than last year, each one was substantially more intense than the hurricanes in previous years. Early predictions for the current hurricane season said that it would be more mild than years past, but on May 11, 2018, The Guardian published an article about the prediction of 2018’s hurricane season. They explained, “The peak season for Atlantic storms, which officially starts on 1 June, is set to spur as many as 18 named storms, with up to five of them developing into major hurricanes, according to separate forecasts from North Carolina State University and Colorado State University.” This prediction was made while reflecting on 2017’s most damaging hurricanes being Hurricane Harvey, Hurricane Irma, and Hurricane Maria, all of which caused a deep devastation that is still being dealt with today.

To assess the intensity of hurricanes, meteorologists use the Accumulated Cyclone Energy Index (ACE Index), which measures the strength, frequency, and duration of the storms for each year. Another article from The Guardian used an info-graphic to display the data given to them from the ACE Index. In an explanation inside the info-graphic it says, “In the past 24 years there has been 16 above normal hurricane seasons, the worst on record.” That means that over 50% of the hurricane seasons in the past 24 years have been exponentially worse than any other year. The data collected with the ACE Index is a cumulative analysis of the season as a whole, which means that there was more than one extremely damaging storm in each season to make it a overall above normal season. According to a chart on the Climate Prediction Center, the mean statistic for a normal season is 5.4 hurricanes and in order for a season to be considered above normal there needs to be 8.1 hurricanes or more.

Many scientists and researchers feel that this surge in hurricanes is due to human-induced climate change. Things like warmer ocean waters and a rising sea levels which are caused by the increasing CO₂ in the atmosphere are contributing to the increase in severe hurricanes; when the water heats up, then the molecules expand leading to a rise in sea levels. When asked what she thinks is the best way to reduce greenhouse gases, Sally Lango, a senior and advocate for cleaning up the environment says, “I think that animal agriculture should be reduced, especially the industry of factory farmed animals because emissions from animal agriculture actually contributes to over 50 percent of all greenhouse emissions and more pollution than all forms of transportation combined.” That is just one of the many ways that pollution emissions can be reduced from a human standpoint. There are also many simple things that can go into changing the animal agriculture that anyone can do at home. For instance people can start their own gardens, choose organic locally sourced foods, and even choose a meat-free diet. Every little thing counts and can help reduce the amount of contributions to the warming of the ocean and all the other factors that increase the risks of high impact weather like hurricanes.