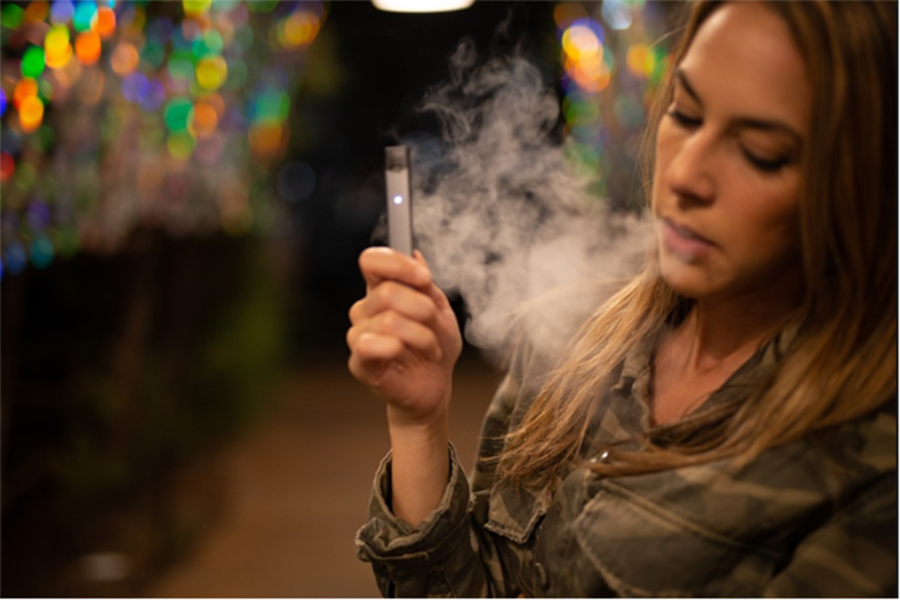 A person using a JUUL e-cigarette.

It is no secret that the devastatingly addictive JUUL culture has swept its way across the country. Tobacco-Free Kids says, “according to the National Youth Tobacco Survey, 11.7 percent of high school students and 3.3 percent of middle school students—over 2.1 million youth—were current e-cigarette users in 2017.” This excludes those who consider the act of “JUULing” separate from the use of e-cigarettes, yet still includes a vast majority of teens nationally. As easy as it is to disregard addicted teens as “lost causes” or “burdens,” some addicted adolescents would rather become clean, but feel their is no way to do so. Regardless of how they started, the feverish desire to quit leads to the same universal hopelessness.

Among addicted teens, are those who have no idea their addicted, those who are addicted and have no issue with that fact, and those who have realized their addicted and are looking for a solution. Battlefield Sophomore, Crystal Dang, explains her belief in the “snowball effect” of nicotine addiction saying, “teens do tend to become addicted to products with nicotine,” and, “whether it is meant to be for fun or to seem similar or cool, it just snowballs and becomes a part of their life.” Her view is similar to many others in that, those who try it once do not always intend for it to become a recurring action.

In a reddit post with multiple responses, one JUUL user describes their withdrawal process saying, “I just got over a little bit of a juul addiction. I had been juuling for like two months with about half a pod to a pod a day and definitely felt addicted to it because of the urges I had.” The user then continued their opinion on breaking JUUL addictions, in regards to medical symptoms by adding, “maybe it’s just me but I think by allowing myself a hit when I was in pain really helped me beat my addiction.” Many other reddit users response posts on this thread included stories of themselves or others breaking their addiction to the popular e-cigarette. Although many face discomforting withdrawal symptoms and clear substance abuse consequences, few users also claim to face the addiction to the action of “JUULing” rather than the substance.

In an effort to help, sources across all genres have come out with “self-help” ways to break vaping, more specifically nicotine, addictions. Such sources include Allen Carr’s Easy Way, Healthline, The Fix, and Quit With Jim. All of which are helpful, however, one of the most easy to digest and simple to follow is the five methods presented in a Wikihow article titled How to Stop Vaping. The article is a straight to the point, easy to follow step by step tool to break a vaping addiction. The five methods presented are applicable to a variety of personality types and cater to those of younger age who may not be able to afford counseling or expensive products to aid their journey. As the article states, “like smoking traditional cigarettes, vaping can be an unhealthy and expensive habit. Most liquids for e-cigarettes contain nicotine, which is addictive. This means that quitting vaping often involves at least some level of withdrawal.” This means teens who want to quit need to find a plan that is easy to follow. With so many great resources, their truly is a light at the end of the tunnel for teens searching for an escape from their addiction.