The meaning behind the memes

The potential guerilla marketing involved in the newest Twitter trends 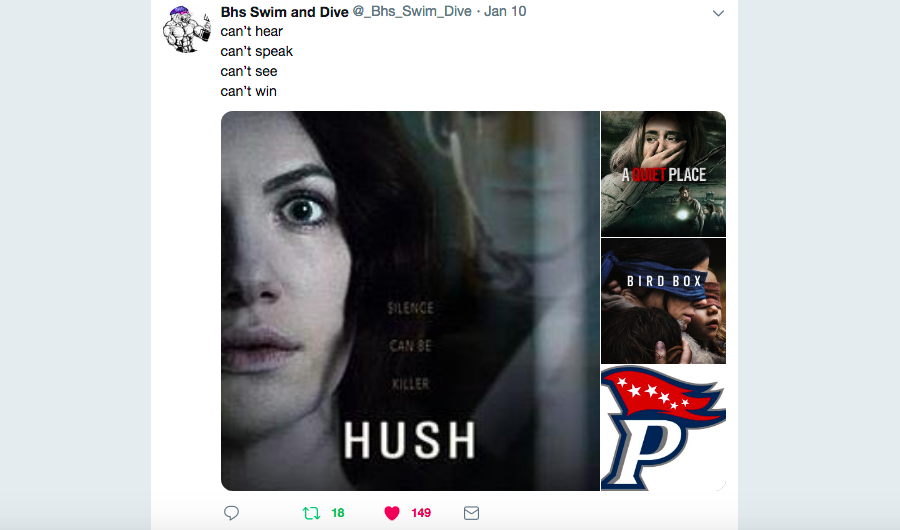 Battlefield’s swim team participating in the popular Bird Box meme before their meet against Patriot. Photo by Ashley Donohoe

During Christmas break, thousands of high school students have the privilege of no longer spending six hours a day at school and are suddenly handed loads of new free time. One activity that eats up teenagers’ time is increased use of social media. During the break, platforms such as Twitter saw a spike in new memes, internet jokes understood and built upon by the entire community. However, some people have started to call into question the validity of these memes’ organic creation because of their involvement with big company products. Speculation over whether memes such as AirPods, Bandersnatch, Bird Box, and more had been planted by their companies to spread during the Christmas season have begun to arise.

Avid Battlefield Twitter user Julia Hyde (@itsjuliahyde) spent a large chunk of her time scrolling through the platform over the break and was quick to notice the large influx of memes regarding the Netflix movie Bird Box, despite the fact she, “got so bored of it within a few days.” The movie centers around main character Malorie, played by Sandra Bullock, witnessing an inexplicable power that causes anyone to see it to die. The movie follows her journey attempting to find safety from this force when unable to use humans’ most important sense, sight. There has been a recent trend of horror movies detailing the escape of certain death while having a particular sense inhibited, and the Bird Box memes centered around this concept.

A particular meme format that arose during break showed a photo of the movie Hush, A Quiet Place, the new movie Bird Box, and then a fourth comedic photograph, with the caption, “can’t hear, can’t speak, can’t see,” and a fourth “can’t” statement that revolves around the accompanying picture. This formulaic approach allows for mass creation of different versions of the meme, along with an easy understanding of the punchline. It also ties Bird Box, a movie released on December 21, with other highly acclaimed movies of the same genre, piquing interest in the film without giving away any of the important aspects of the film. Hyde explains, “we as a culture like to be ‘in the know’ on the latest inside joke or meme and profit off it,” causing many users to feel obligated to watch Bird Box in order to make high-performing tweets regarding it.

This meme helped Bird Box so much, in fact, that its views skyrocketed. On Twitter, Netflix revealed Bird Box was the best performing Netflix film in its first week. However, reviews for the film are somewhat underwhelming, with Rotten Tomatoes scoring it a 64% and audiences giving it a 62%. Critic Richard Brody comments on the blandness of the movie’s characters, saying, “Unfortunately, Bird Box puts these performers through familiar paces, in roles of such tight typecasting that they seem like recurring characters in an extended TV series.” This trend of unoriginality and underwhelming performance calls into question how this film shattered records and got practically everyone on the internet discussing it.

Guerilla marketing is the concept of promoting products with as little money as possible while reaching a large audience. While it is quite complicated to trace the origins of an internet trend, some users contemplated how an underperforming movie could receive such high levels of engagement to the point where it outperforms all other previous Netflix movies. Theories that Netflix was able to boost engagement or plant different memes regarding the movie began to arise, to the point where one Twitter user felt the need to shoot down suggestions that their account is a robot tweeting for Netflix. With the anonymity of social media, it is complicated to see how an audience can be manipulated into providing a company with free marketing for their products.

As Christmas time rolls around, students should become more aware of the influx of memes regarding big company’s products and how they could seem to allot an unusual amount of attention compared to similar types of memes. Bird Box was given a strangely useful meme format by the public, while other movies such as Bandersnatch witnessed more organically created jokes concerning the movie’s plot and unique choices the audience is allowed to make. Yet, as time passes, it is almost impossible to tell whether the public has developed a confusing obsession with a mediocre movie or whether a large company has pulled strings behind the scenes.