What will the club look like this school year? 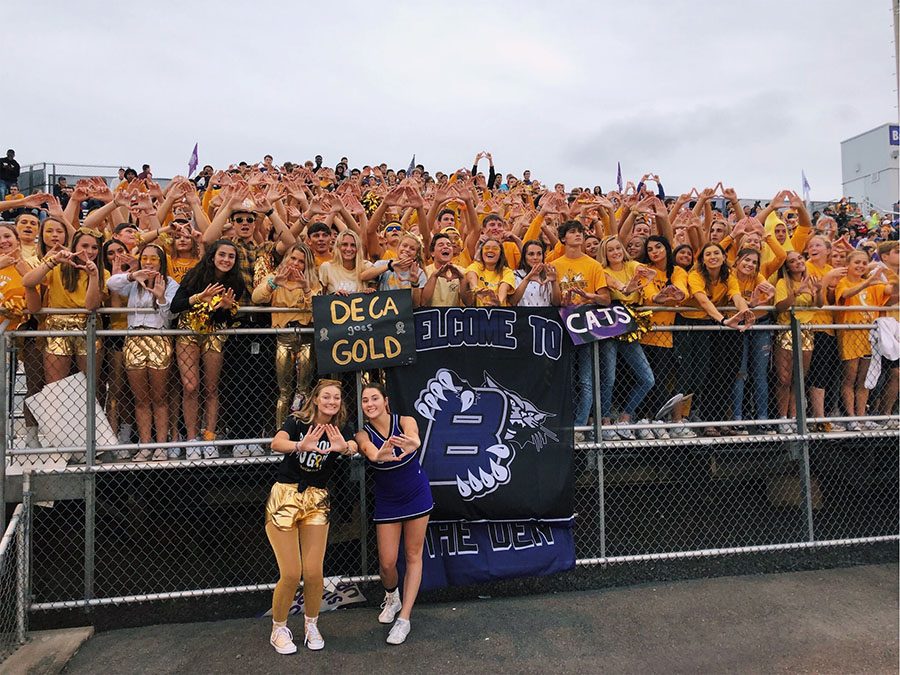 The Student Den at the Gold Out game, supporting the kids and the DECA cause. Photo via Mrs. Murphy.

DECA (Distributive Education Clubs of America) is facing some changes this year as its president, Ashley Hansen, is finding every possible way to make the club even more successful than in years past. Hansen has reached out to many students and has advertised DECA through multiple aspects. Earlier in the school year, some of the DECA officers attended the freshman orientation in hopes of attracting new Battlefield students to the club.

Although DECA is one of many clubs at Battlefield, it has seemingly made one of the most significant impacts on the school’s community. Hansen has already planned on having themes every month focused on raising awareness and money. September was Pediatric Cancer Awareness Month, where one of the home football games was Gold Out-themed in efforts to support the Battlefield community and those affected by the diseases. Hansen found several opportunities for club members as well such as Curefest, which takes place in D.C. Hansen is extremely passionate about volunteering at these events and encouraging the club members to contribute as well. She plans on continuing this every month. October is Breast Cancer Awareness Month, therefore DECA will be helping out that cause as well.

In an interview, she shares her feelings towards DECA, “DECA: a simple word that has had a huge impact on my life and an organization that has allowed me to express myself and my passions. It has taught me skills I can use not only during school but also the rest of my life. DECA has introduced me to my future career field, some of my best friends, and a family within Battlefield.” She has been in DECA for all four years of high school. She started DECA her freshman year at Fairfax High School, and then spent another three years in Battlefield’s DECA club.

Just like Hansen, senior Morgan Murphy has also been in DECA all four years. Murphy is the treasurer this year and works alongside Hansen. As treasurer, she organizes all the fundraising events, which is how they are able to support so many causes. When asking Murphy about her DECA experience she states, “I joined DECA originally as something that could look good on my college resumé, but it turned out to be something so much more than that. I have made friends and gained so many life skills such as public speaking and leadership. People should definitely join DECA even if they do not want to do the competition side of it, it is a great and rewarding way to help others and get involved.” DECA is open for any student to participate in extracurricular activities and make a difference within Battlefield.

DECA members can either contribute through volunteering, through the competitive aspect, or through both. However, in order to compete the student must be taking a marketing class. There are multiple different categories for the DECA chapter projects, where these members chose an issue they are interested in and turn it into a project to later present to judges.

Junior Ella Butcher is a second year member in DECA. She describes the club similarly to Murphy and Hansen, “The club is full of great opportunities for volunteering and is altogether a great way to meet new people and boost your confidence.” Butcher is in a marketing class, so she is able to compete within the club with her chapter project. Last year at states, Butcher and her partners won 4th place in the Public Relations category. She is looking forward to going to states this year as well.

DECA has many great plans for the rest of this school year. With the help of this year’s officers, this club will be dedicating enormous amounts of time and effort to support many needy causes.