The Battlefield community has more school pride than ever before 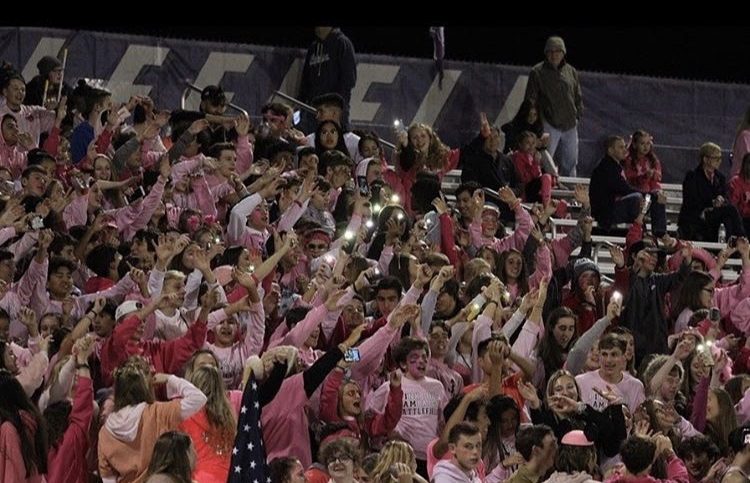 The Den at the Battlefield Pink Out game is cheering on the football team. Image courtesy of the BHS Sports Network.

It is no secret that in years past Battlefield has not been the most spirited of schools. However, this year, the whole Battlefield community has showed out to lots of games and events. The Den is always filled and ready to cheer on Battlefield athletics, no matter where the game is.

The new surge in school spirit could be due to the creation of SALT, or the student athlete leadership team. On of SALT’s main purposes is to increase school spirit and that was their main focus during the first semester. Sophia Sequino, a member of SALT, says, “We have been trying to push student body involvement by promoting all games and events over social media and making commercials to post.” By promoting unpopular sports, as well as popular ones, they have increased school spirit as well as getting students to show support for all sports teams.

Increasing the confidence of teams and creating a positive environment are not the only good things that come from school spirit. According to Varsity, a company that capitalizes on the business of school spirit, a study that they conducted shows that “students with higher levels of school spirit perform better academically, are more civically engaged, and are happier in general than their less-spirited peers.” If a student hates their school, they do not want to put in the effort while they are there. Students who have pride in their school will try while they are in school, which leads to a positive attitude and higher GPA. The study also shows that “Above three-quarters of students (75%) with higher levels of school spirit1 perform above average academically, significantly more than those with low school spirit (42%).” So, if a student is failing math, this study suggests they should just show up to a football game to gain some pride and motivation.

It is clear that Battlefield athletics have greatly benefited from the surge in school spirit. So far, almost all Battlefield teams have had excellent performances at games, meets, and competitions. The school even sent two teams, volleyball and cheerleading, to states. Both teams did very well, but cheerleading was the team to come home with a state championship after beating all 54 teams in their division.

Hopefully in the future, Battlefield will continue to have lots of pride in athletics and academics. Bob Gardner, Executive Director of the National Federation of State High Schools (NFHS), says that   “These activities (sports events) build a student’s self-esteem and confidence as well as provide lifetime memories.” There are still many sports playing and have yet to play, so students are encouraged to show up and show out, it could just help you pass science!