A look at the major Democratic candidates 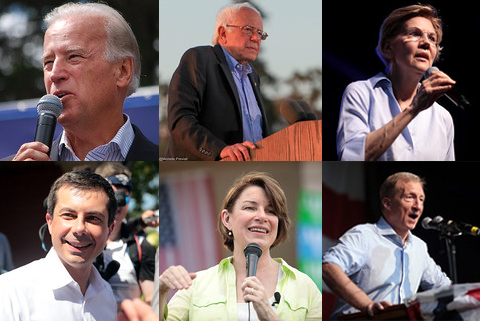 The seventh Democratic debate, as a part of a collaboration between CNN and The Des Moines Register, is due to take place on Tuesday, January 14, at Drake University in Des Moines, Iowa. As of right now, six Democratic candidates qualify for the debate: former Vice President Joe Biden, United States Senator Bernie Sanders, United States Senator Elizabeth Warren, Mayor of South Bend, Indiana Pete Buttigieg, United States Senator Amy Klobuchar, and philanthropist Tom Steyer. As the election campaign heats up as the field grows narrower and Election Day draws nearer, here is a look at the candidates before the debate.

Biden told reporters in April 2019 that he believes that Democratic core voters are “still basically liberal to moderate Democrats in the traditional sense.” According to Politico’s Natasha Korecki and Marc Caputo, the Biden campaign is running based on that premise. Although he viewed as a moderate, he has touted his progressive record as a Senator. Unlike his more progressive colleagues, however, he has rejected the idea of a single-payer healthcare system, often nicknamed Medicare-for-All, in favor of a public health insurance option. In matters of general policy, he plans on codifying the Roe v. Wade precedent on abortion rulings into statute, prohibiting discrimination on the basis of gender and sexual orientation with the Equality Act (H.R. 5), and repealing the Hyde Amendment, a piece of legislation that bans the usage of federal usage to pay for abortion procedures except in cases of rape, incest, and harm to the mother. Biden has also proven eager to tackle climate change, supporting a version of the environmentalist Green New Deal policy package that aims for full decarbonization by 2050, as well as evaluate fracking permits to determine their safety. On the issue of criminal justice, he supports the abolition of the death penalty and would decriminalize, but not legalize, recreational cannabis usage.

United States Senator from Vermont (2007 on)

Having ran unsuccessfully for the 2016 Democratic nomination, Sanders has announced in March 2019 that his campaign staff will unionize with UFCW Local 400, making Sanders’ campaign the first major presidential campaign with a unionized workforce. Ever since his run in 2016, his social-democratic ideas have gained much acceptance within the party, with ideas such as Medicare-for-All, free college, and the Green New Deal becoming important issues in the 2020 race. His campaign has placed an emphasis on reversing economic inequality as well as labor rights. As far as domestic policy goes, Sanders has come out in favor of paid parental leave, abortion rights, equality for LGBT people, the abolition of the death penalty, and recognition of the concerns raised by the Black Lives Matter movement. Where foreign policy is concerned, he has proposed reducing military spending and adopting a more multilateral approach. He has also spoken on the importance of considering labor rights and environmental protections while negotiating trade agreements.

United States Senator from Massachusetts (2013 on)

Warren, an established progressive in her own right, has been a major player in the presidential race, securing an endorsement from the social-democratic Working Families Party. Her campaign platform has been noted for its populist approach to economics, with Warren declaring that “America’s middle class is under attack.” Under her Accountable Capitalism Act, United States corporations that worth more than $1 billion should allow their employees to select 40% of their board of directors. Furthermore, she has also proposed an “ultra millionaire tax” on the 75,000 richest families which, she estimates, would provide the federal government around $250 billion in annual revenue to fund several initiatives (universal childcare, pre-K, student loan debt relief, affordable housing, down payments on the Green New Deal and Medicare-for-All, etc.). Warren has taken a hard stance on corruption as well, proposing a public lobbyist registry, increased antitrust law enforcement in the technology sector, and a law enforcement unit dedicated to investigating crimes at financial institutions. In regards to government and administrative processes, she has proposed the abolition of the Electoral College, a ban on gerrymandering, and the overturning of the decision in Citizens United v. FEC, to be followed by a ban on Super PACs. On foreign policy, she supports cutting the defense budget, a ban on defense contractors, and a multilateral foreign policy. She also supports comprehensive criminal justice reform, a ban on private prisons, community policing, and the legalization of marijuana.

Buttigieg, like Biden and Klobuchar, is one of the more moderate Democrats running for the nomination. On economic policy, he is pro-labor, open to raising the federal minimum wage to $15, providing paid family leave, pursuing antitrust action against large technology firms, and providing a public health insurance option, calling it Medicare-for-All-Who-Want-It. Climate change has also been a major part of his platform, with Buttigieg presenting a three-pronged approach to climate change: (1) creating clean energy jobs, (2) investing in disaster relief and prevention, (3) promoting America’s role in fighting climate change. On criminal justice, he opposed the death penalty, and supports the restoration of voting rights to ex-felons, as well as the legalization of marijuana. Two aspects of his domestic policy have been noted as rather unique. First, there is his Douglass Plan which would dedicate $10 billion in African-American entrepreneurship over five years, grant $25 billion to historically black colleges and universities (HBCUs), and pass a New Voting Rights Act to expand voting access, among other things. Secondly, there is his proposal for a possible mandatory yearlong term of national service for those turning 18 years old, possibly extending this from strictly military service to membership in volunteer organizations like AmeriCorps and the Peace Corps. On foreign policy, he supports the maintenance of an intelligence presence in Afghanistan and the demilitarization of the U.S.-Mexico border. He is also pro-Israel, but critical of Israeli Prime Minister Benjamin Netanyahu.

United States Senator from Minnesota (2007 on)

Ever since Klobuchar began her campaign, she has described herself as moderate and pragmatic. With that characterization, she has described progressive goals such as the Green New Deal and tuition-free college as aspiration, instead choosing to pursue a renewal of the United States’ commitment to the Paris Climate Agreement and free community college, respectively. She has said that infrastructure is her top priority, unveiling a trillion-dollar plan to update the nation’s infrastructure which would, among other things, repair and replace old roads, bridges, and highways, provide an internet connection to every home by 2022 and build climate-friendly and green infrastructure. On economics, she supports Trump’s steel and aluminum tariffs, anti-poverty programs for rural Americans, a 25% corporate tax rate, and a path to universal healthcare, starting with a public health insurance option. As far as domestic policy goes, Klobuchar supports automatic voter registration for every US citizen on their 18th birthday, directing federal law enforcement resources towards combating white supremacists, universal background checks for gun sales, and a $100 billion dollar plan to combat the opioid crisis.

Beginning October 2017, before Steyer decided to run for President, he founded the Need to Impeach campaign, aiming to spearhead the call to impeach President Trump. As of July 2019, he is said to have spent as much as $70 million on the campaign. At the same time, he abandoned plans for a possible California gubernatorial or senatorial run by announcing the start of his presidential campaign. Although he maintained a meager amount of support nationwide, his spending on political advertising can be said to have kept afloat. Steyer has summarized his platform in the form of the 5 Rights: the right to vote, the right to a clean environment, the right to an education, the right to a proper wage, and the right to health. The environment has been a particularly prominent facet of his platform, citing the need to investigate the economic risks of climate change and combat them, having already pledged to do so in October 2013 alongside then-New York City mayor Michael Bloomberg and former Treasury Secretary Henry Paulson, as a part of the Risky Business Project. On healthcare, Steyer has opposed Medicare-for-All, but does support more affordable healthcare. On gun control, he, like most other Democratic candidates, supports universal background checks and banning assault weapons. On other issues of general policy, he attacked the Tax Cuts and Jobs Act of 2017, colloquially known as the Trump tax cuts, calling it a “thinly veiled reverse Robin Hood,” and supports overturning the Citizens United v. FEC decision.