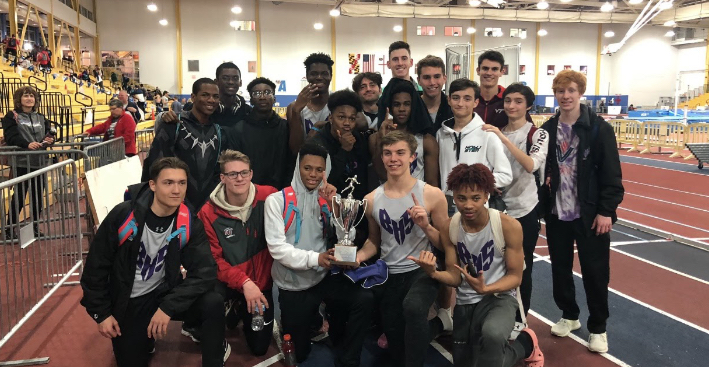 On Thursday, February 13, the Battlefield track team competed at the regional championships in Maryland. The boys team brought home a first place victory, while the girls finished in a strong fourth. Their region, 6B, is considered to be one of the most competitive in the country. With personal records, state and national qualifiers, and school records, this season and regional performance has been one of the best in BHS track history.

The boy’s team had some incredible individual performances, with boys pole vault taking both first and second place. Senior Tyler Lynch won with a height of 15’, which leaves him seeded to place highly at states and qualified for the National championships later this season. Sophomore Brian DiBassinga placed second for pole vault and qualified for states; DiBassinga also placed first place overall in triple jump. Both girls and boys 400 meter relay brought home first place finishes. There was another strong victory in the boys 800 meter relay, which consists of seniors Jackson Tirrell, Alex Hewitt, Joseph Morris, and David Kennedy.

This season has been an extremely strong one for the Bobcats. They have had amazing performances throughout the season, like the boys 800 meter relay being ranked one of the fastest in the states and multiple national qualifiers. Battlefield (both boys and girls) also won their district championship. The Bobcats beat their rival Patriot, as well as Osbourn, Osbourn Park, Stonewall, and the newly added John Champe High School to get the victory. The Battlefield track coach, Jarrette Marley, tweets, “I never have and never will take (this team) for granted. Proud of my Battlefield Bobcats!” Marley has been the Battlefield coach for over five years now, and has brought countless titles and school records. The team itself has worked hard this season, but some individuals have gone above what was expected.

The mixed 400 meter relay, which means that it is a combined boys and girls race, qualified for nationals at an earlier meet and finished in a strong first at one of the most competitive meets on the east coast. Junior Kaden Waller and sophomores Austin Gallant, Kristen Mancinelli, and Madyson Kannon all plan to rank high at the upcoming indoor Nationals. They qualified for nationals at the Virginia Showcase, which hosts the most competitive high schoolers on the east coast. Multiple national records were broken, which makes Battlefield’s first place finish in the mixed 400 relay more impressive. Mancinelli tells Milesplit, “For the 4×4, it’s really just mental. You really have to push yourself that last one hundred to get where you want to be.” Mancinelli also hopes to qualify for Nationals for long jump.

States takes place at the beginning of March, and then indoor Nationals is next and takes place in New York, and the historical Armory indoor track. This indoor season will lead into a strong spring season, where the Bobcats will hopefully bring home more championship victories.