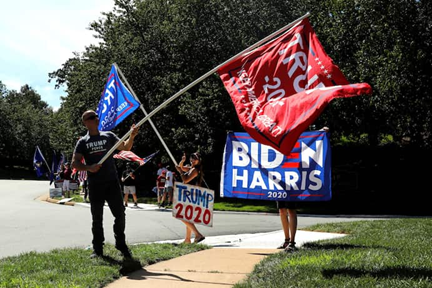 Election Day is only a few days away, and it is set to be busier than ever. On November 3, not only will the Battlefield community choose between President Donald Trump (R) and former Vice President Joe Biden (D) in the presidential election, but they will also choose between Senator Mark Warner (D) and retired Lieutenant Colonel Daniel Gade (R) in a Class II Senate election. Representative Jennifer Wexton (D) and retired Marine Aliscia Andrews (R) will also face each other in an election for Virginia’s 10th congressional district. There will be quite a bit on voters’ minds by then, so what will they be thinking about? VCU’s L. Douglas Wilder School of Government and Public Affairs found that among the most important issues in Virginians’ minds were systemic racism and police reform, the coronavirus outbreak, and the economy. These findings then beg the question: how will these issues affect voters going to election season?

In recent months, the Black Lives Matter movement, a decentralized protest movement largely centered around police reform and civil rights, has returned to the fore of the broader American political discourse after a lapse in popularity from 2015 to 2018. As of September 29, according to opinion pollster Civiqs, 51% of Virginians support the Black Lives Matter movement, 37% oppose it, and 11% are unsure. This development follows the deaths of George Floyd, Breonna Taylor, Elijah McClain and several other African-Americans at the hands of police officers since May, sparking mass protests across the country, including in the cities of Bristol, Harrisonburg, and Richmond, as well as throughout Northern Virginia and the Hampton Roads area. Such calls have rung throughout the Commonwealth, especially in the Democratic-controlled General Assembly, with the Senate approving a sweeping package of law enforcement reforms intended to crack down on police misconduct, whereas the House of Delegates plans on taking a more piecemeal, but no less bold, approach to criminal justice reform. Furthermore, as is the case in many Southern states, protests across Virginia have often been accompanied by calls for the removal of Confederate statues and iconography from public places, including the Robert E. Lee Monument, the last Confederate statue standing along Monument Avenue in Richmond.

On March 7, 2020, a United States Marine stationed at Fort Belvoir tested positive for coronavirus, the Commonwealth’s very first case. Five days later, Governor Ralph Northam declared a state of emergency, leading to the closure of businesses, schools, and universities. Since then, 141,138 Virginians, including Northam and his wife, have tested positive and around 3,000 have died. Northam has been the target of much criticism for his response to the pandemic, with Virginians’ approval of his handling of the outbreak falling from 76% in April to 61% in July. Mark J. Rozell, dean of GMU’s Schar School of Policy and Government, calling it “a missed opportunity” to confidently lead the Commonwealth in much the same way that other governors had done for their states, most notably Maryland’s Larry Hogan and New York’s Andrew Cuomo. Furthermore, his plan to reopening Virginia has been marred by bipartisan criticism, being seen as too slow by Republicans and business organizations and too fast by Democrats and civil rights groups.

Jobs and the Economy

The general uncertainty caused by the coronavirus outbreak led to one of the worst economic downturns in world history in mid-to-late March of this year. With the energy, tourism, and hospitality industries reeling and lockdown restrictions in place, the national unemployment rate rose dramatically from 4.4% in March to 14.7% in April. Such dire economic conditions were sure to have had an impact on the Commonwealth. As of August 2020, Virginia’s unemployment rate sits at 6.1%, up since March (3.3%), but a marked improvement from April’s numbers (11.2%). There may be more good news to come, as Governor Northam stated in a virtual forum with Maryland Gov. Larry Hogan and D. C. Mayor Muriel Bowser that “as soon as we can get this health crisis behind us, we’re confident that Virginia will be a very friendly state for business.”

Incumbent Mark Warner (D) is heavily favored to win a third term in the Senate, with FiveThirtyEight giving him a 99% chance of victory. He has been endorsed by organizations such as the Coalition to Stop Gun Violence, the Human Rights Campaign, the Sierra Club, and Planned Parenthood. His opponent, Daniel Gade (R) has been endorsed by the likes of Republican National Committeeman Morton Blackwell, United States Representative Dan Crenshaw (R-TX-2), evangelical pastor and activist E. W. Jackson and Delegate Wendell Walker (R-23).

Incumbent Jennifer Wexton (D-10) is heavily favored to win a second term in the House, with The Cook Political Report rating the 10th as a Safe Democratic district. She has been endorsed by organizations such as EMILY’s List, the League of Conservation Voters, and NARAL Pro-Choice America. Her opponent, Aliscia Andrews (R) has been endorsed by former Del. Tim Hugo (R-40) and RNC co-chair Tommy Hicks.