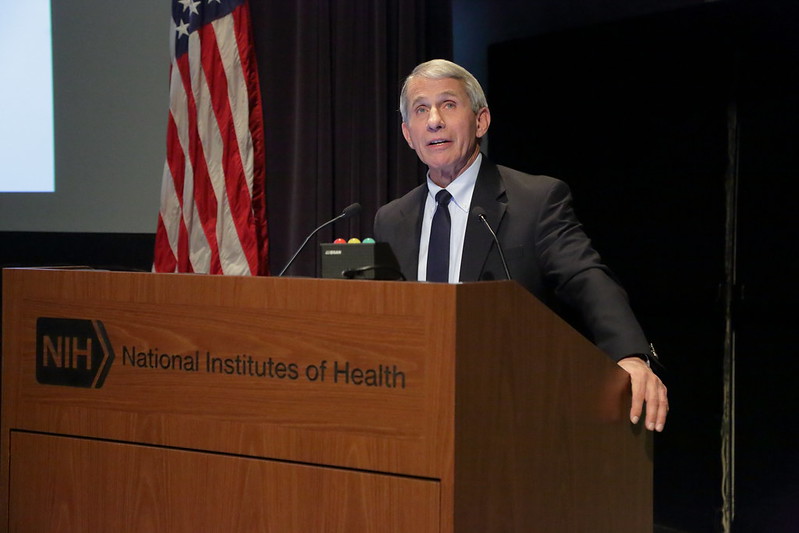 Anthony Fauci, head of the U.S. National Institute of Allergy and Infectious Diseases, giving a statement Photo from Flickr via Creative Commons

Over the course of the COVID-19 pandemic, an issue in the medical community has been revealed or rather, amplified. Typically, the groups that exhibit the biggest amount of skepticism are minorities, whether that be because of a lack of access to medical resources and treatments, biases, or past experiences and historical events involving injustice in the receipt of medical care. The statements released by organizations such as the Centers for Disease Control (CDC), Food and Drug Administration (FDA), the World Health Organization (WHO), or leaders such as Dr. Anthony Fauci containing, at times, unspecific or contradictory information due to the unprecedented nature of the virus, fueled peoples’ apprehension, even leading some to self-prescribe or take alternate medicines.

A discussion run by The Institute for Science & Policy and the Center for Bioethics & Humanities at the University of Colorado and co-hosted by George Sparks, President & CEO of the Denver Museum of Nature & Science, and others covers this topic. Sparks first speaks about the optimism he experienced towards the beginning of the pandemic when seemingly everyone was on the same page. “But then slowly, as things started to devolve, the science came under more of an attack.” He follows this by saying, “So the thing that I want you to remember tonight is that science is a journey. It is never over. Science is not immutable… Science is the best that we have today. It involves models and theories and trials and then repeating the process over and over again. It turns out those are not the best characteristics for influencing people and influencing public policy. They want certainty, especially when it’s an existential threat like COVID.” Sparks’ main message to the audience throughout the discussion is that it must be understood that conflicting information from different sources does not inherently mean one is false, but rather that there is more to be known, especially when pertaining to scientific material.

Among medicines people are using as substitutes for the vaccine to treat the virus is hydroxychloroquine, primarily used to treat malaria, and ivermectin, primarily used on animals to treat parasites. Poison control hotlines are experiencing rises in calls regarding ivermectin complications and the FDA has pleaded for people not to take it saying, “Never use medications intended for animals on yourself or other people. Animal ivermectin products are very different from those approved for humans. Use of animal ivermectin for the prevention or treatment of COVID-19 in humans is dangerous.” False information is extremely dangerous and has caused an influx of people being hospitalized not only for the virus, but as a result of taking matters into their own hands.

Erin Dougherty, senior at Battlefield High School, sustained a 1 in 10,000 reaction to the COVID-19 vaccine in which she passed out and twitched as she was unconscious. Although the experience was frightening, Erin asserts that her trust in the medical community did not waver as, “I feel that the professionals are working to help us and do the best they can to keep us all safe and healthy.” Reactions to the vaccine, such as the one Erin had are why some are apprehensive to receive the vaccine. They would rather take their chances with the side effects from the virus than the vaccine. However, it has been established that the long-term effects are unknown for both.

Since the COVID-19 pandemic has been at the center of daily functions for over a year, numerous sources have covered the virus, with varying degrees of bias and constantly shifting information. The abundance of information on the internet has reinforced the mistrust of the medical community present in certain groups of society.